Van West clarified that there are a few conditions to the discounted price:

• This purpose of the experiment is studying the effect that fuel price flying has on flying activity as well as understanding how fuel price factors into the complete cost picture.

• The offer is open to any piston-powered GA aircraft that can fly into San Marcos Municipal Airport under its own power. Only the regular tanks in the aircraft will be filled.

• To maintain a reliable supply for everyone and keep delays to a minimum, the fueling limit is 200 gallons per aircraft per day. Aircraft requiring more than 200 gallons may purchase that additional amount at the regular price. We won't fuel aircraft that we believe are violating the spirit of the experiment.

• The $1 price is valid for the entire month of October during normal operating hours, 6am to 10pm.

• San Marcos Airport is a former military training airport and has acres of ramp space, so space for waiting or parking overnight is not a problem.

• Data collected from pilots during the month will be aggregated before publication. Absolutely no individual personal information will be shared. 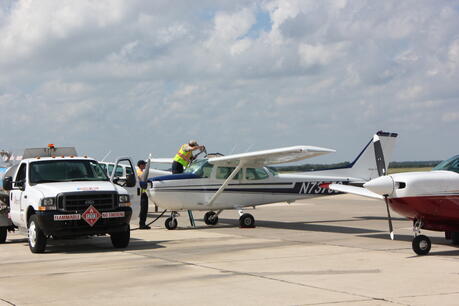 For the month while one-dollar fuel is available, CEOs and other leaders from partner companies will conduct town meetings at the Skyport to answer pilot questions and hear opinions on the direction of their products and the aviation industry. Pilot opinions on what motivates them to fly will also be part of the data published when the experiment is complete. The latest schedule is available at: www.redbirdskyport.com/flymore.

“We chose October for this test to take advantage of the fantastic flying weather in Texas, and give pilots additional incentive to fly to AOPA Summit in Fort Worth, October 10-12, and the Migration Flight Training Conference at Skyport, October 28-30,” says Van West. “When the month is up, we expect to have fresh insight into how fuel price really factors into the many forces affecting how often GA pilots fly.”