While Disney’s Dusty learns how to fight fires on movie screens across the U.S., visitors at Oshkosh can try it for themselves at the Redbird Flight Simulations tent.

Prior to the release of Planes: Fire & Rescue, Disney approached Redbird Flight Simulations about building a Dusty simulator people could actually fly. The result of that collaboration has toured the U.S. promoting the movie, and will be available for flight at Redbird’s tent (Booth 304) at Oshkosh Airventure.

“This has been a terrible year for wildfires, and we in no way wish to make light of the tough and dangerous work done by real air-attack pilots every year,” says Charlie Gregoire, VP of Sales and Marketing for Redbird. “However, you never know when a first exposure to aviation, even just for fun, could set in motion a career that eventually saves lives. While based on the cartoon Dusty, the underlying technology is what we use for actual pilot training.” 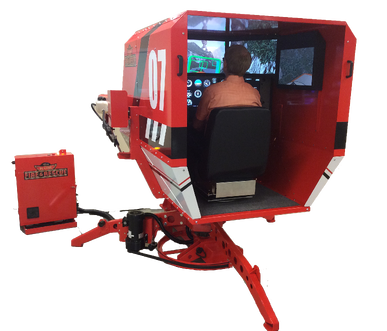 The technology is Redbird TRACE, the same interactive system used for the worldwide Flying Cup Challenge and Redbird’s Migration training program in development. In the Dusty scenario, the pilot must approach a wildfire, drop water, reload the water tank at a nearby lake, and drop again. Disney provided landscape art from the actual movie, as well as the voice actors for the characters Blade and Dipper, who coach the pilot during the simulation.

“These custom simulators are becoming a bit of a tradition,” says Gregoire. “We did a J-3 Cub in 2012, a Yak-52 for the Aerostars last year, and now a fictional crop-duster based on an Air Tractor AT-301. Your guess is as good as mine what we’ll bring to the show next year.”