“When we opened the Flying Challenge at Sun n’ Fun last April, we didn’t know if we’d get a hundred participants or several thousand,” says Charlie Gregoire, VP of Sales and Marketing for Redbird. “So we’re pretty happy with the results.” 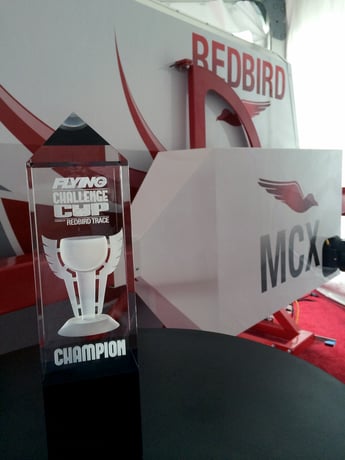 In total, nearly 2000 pilots, student pilots and aviation enthusiasts signed up for the Flying Challenge Cup. Not all lived close enough to a Redbird Simulator to compete; yet over 300 flew the challenge in 32 U.S. states, Canada, Australia, Panama and Saudi Arabia. In total, this group launched about 8000 times to try and better their performances—over 500 hours of flight time in Redbird simulators. Gregoire says the data collected watching pilots improve as they learn is a first for the industry.
“We’re taking the TRACE technology powering these challenges and building the next generation of flight training. That’s well underway, and we expect it will be part of active flight training before the end of the year,” says Gregoire.
The finalists range in age from 15 to 71 (details at http://tinyurl.com/pq7hghu). All have been invited to Oshkosh to the championship event, which will be filmed on stage in Boeing Plaza at 9:00 am. Airshow and race pilot Mike Goulian, EAA’s Hal Bryan and Flying magazine editor Robert Goyer will host the show. The final event is a flight at the virtual Oshkosh airshow, consisting of a short-field takeoff, a steep turn, and a precision landing to a stop all on (virtual) Oshkosh’s Runway 18. The video explanation is available at http://tinyurl.com/kukedmj.
“We’re privileged with this opportunity to bring 12 people to Oshkosh, most of whom have never been,” says Gregoire, “and it should be a terrific event. But the most exciting takeaway from this entire challenge is that TRACE works. People all over the world climbed into those simulators, got feedback on their performance, and felt compelled to do better—and they did get better, a lot better, time and time again.”