Pilots and non-pilots invited to try three flying-skills scenarios that hone their abilities—and could win them a free trip to Airventure at Oshkosh.

A good challenge is irresistible, which is why Redbird Flight Simulations, Bonnier Publications (owner of Flying magazine), and ten other sponsors launched the Flying Challenge Cup at Sun ’n Fun. “It appeals to our competitive nature,” says Charlie Gregoire, VP of Sales and Marketing for Redbird, “but this is much more than a flour-bombing contest amped up to a global scale.”

Gregoire explained that the Challenge is an early example of Redbird TRACE technology, making flight training “more engaging, more effective, and more affordable all at once.” Challenge participants sign up for free at www.flyingchallenge.com, and get a personal account to track their progress. They also receive a PIN, allowing them to log on to a Redbird simulator at any participating school (including the Redbird tent at Sun ’n Fun) and launch the challenges. Each challenge has three parts: a training video with an overview of the skills involved, a training flight where the participant flies the skills challenge with guidance from TRACE, and a challenge flight where the same skills are evaluated, but with no assistance. Every attempt, assisted or not, has scores shown onscreen and uploaded to the participant’s account. Participants get a coupon at signup, so the first half-hour of sim time at any school is only $15. 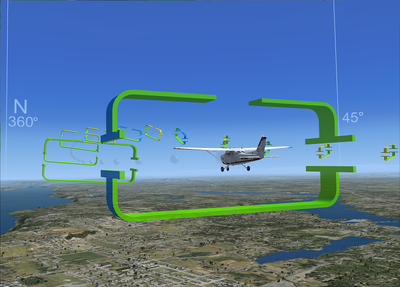 “The simulator watches the pilot,” says Gregoire, “measuring, coaching, adapting, scoring, and recording his or her progress.” Gregoire added that the Challenge design, as well as partnership with Bonnier and its network of publications, intentionally reaches beyond the pilot community. “We created specific categories for Student Pilots and Non-Pilots to ensure they would be represented in this challenge. Top performers in all categories get invited to Oshkosh.” Gregoire also noted that, “Potential pilots expect the self-guided, technology-based training available in virtually every other part of their lives. Redbird TRACE provides that, and the Challenge Cup is a great way to showcase it.” Gregoire also says the system is designed so individual schools can run local events and contests based on the challenges.

The three challenges are Precision Landings, Steep Turns, and Lazy Eights, with the Landings challenge opening for flight on the first day of Sun ’n Fun. The others will come online soon after. The Challenge Cup runs from April 1 at Sun ’n Fun through the end of Oshkosh on August 3, though qualifying scores for Oshkosh must be recorded by July 7.