Owners and instructors say the $200,000 A-ATD bests many million-dollar simulators.

Potomac Flight Training in Sterling, Virginia needed a simulation base capable of training the Collins Pro Line 21 avionics in a realistic environment for their King Air 350 type rating and recurrent training. Potomac’s General Manager, Harry Arthur, says the Redbird was chosen for both its reasonable cost and its fast delivery time. “We heard they were doing Proline for the FAA. We signed the contract [with Redbird] on August 31 and had it before the end of the year, which is just unheard of in this industry.”

Arthur notes that the now-certified A-ATD can’t be used for the entire type rating, but says, “You can get 80 to 85 percent done in the Redbird.” In agreement is instructor-pilot Mike Mize, who has extensive experience in top-end simulators at Flight Safety. Mize says, “Compared to a lot of Level-Cs it has as good or better visuals, and they’re integrated better with the motion …. You look at $10- to $15-million Level-D sim [the highest rating for full flight simulators] and compare Redbird’s, and the capability per dollar is through the roof.” 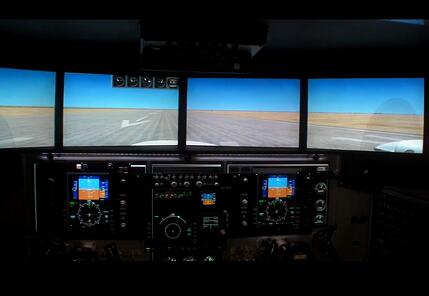 The King Air 350 A-ATD costs $199,800 and emulates the Collins ProLine 21 system with Dual FMS-3000, dual PFDs and a single MFD. Dual flight controls for pilot/co-pilot (MMC) training is standard. Oxygen masks are optional to allow for high altitude/pressurized cabin training. Redbird also has type-specific cockpits for the King Air 90GTx, Piper Meridian, Mirage/Matrix, and Cessna Caravan. The Citation Mustang and Citation CJ1+ will be ready by next January and the Embraer Phenom 100/300 in 2013. “I've been converted to being a big fan of Redbird,” says Arthur. “I'd seen the smaller GA devices and thought, ‘that's nice,’ but this is kind of a new focus. I applaud Redbird for getting into this arena.”